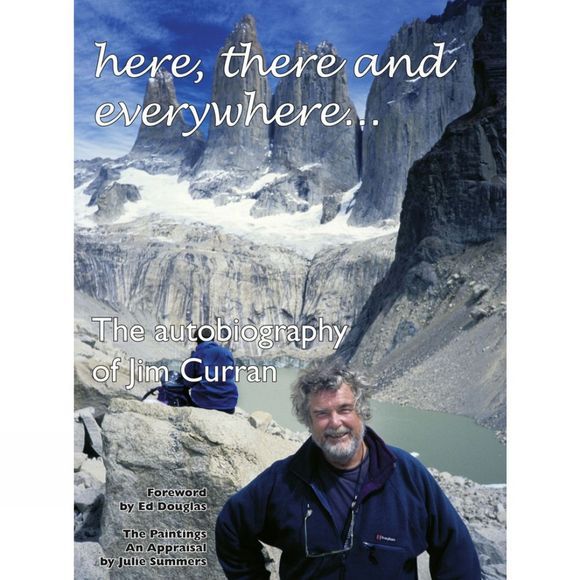 Edgebrook Publishing Here, There and Everywhere...

The master storyteller, Jim Curran, has finally produced the biggest story he can tell. For readers of his previous books it is full of surprises, conundrums and split lives. Teaching in Bristol during the week, he lived a different life in Sheffield at weekends. A teacher of art, he developed a career as a mountaineering filmmaker before realising that he'd always wanted to be a painter. And this great humourist turns out to be an intermittent sufferer from depression. The warmest of people, as his characterisation of his friends here demonstrates, he reveals a strand of loneliness throughout his life. By turns this book is hilarious and heart-breaking, anecdotal and reflective, sociable and self-doubting. Its drive for honesty is as unwavering as its eye for a self-deflating story. As a rigorous self-portrait its impact lingers beyond the words, the pencil and the paint.

Jim Curran has climbed worldwide for exactly half a century with many of the leading lights of mountaineering – Chris Bonington, Joe Brown, Doug Scott, Alan Rouse. He is an artist, mountaineer, author and filmmaker. He has visited the Himalaya 15 times and written seven books. Both books and films have won many awards at festivals worldwide and in 1997 he was awarded an Emmy for outstanding camerawork. Jim has had exhibitions of his paintings at The Alpine Club in London and at The Brewery Arts Centre in Kendal and has been shortlisted five times for the prestigious Boardman Tasker Award for Mountain Literature. He won The Yorkshire Post Book of the Year Award in 2002 and Best Book on Non-Fiction at the Banff Mountain Book Festival in Canada in 1995. In this autobiography Jim Curran tells the story of two great loves of his life, mountains and art. In here, there and everywhere... he travels to many of the world's great ranges describing a life climbing, filming and writing about them. This is in contrast with a long commitment to art education in Rotherham and Bristol. Jim Curra